As an Amazon Associate, we earn from qualifying purchases. We get commissions for purchases made through links in this post.

The primary purpose of a strainer is to pour alcohol while holding back any unwanted ice, pulp, seeds, or other parts of fruit or vegetables you don’t want in your drink. However, that’s not the only reason. Expert bartenders often claim that specific strainers are better than others.

Or, they are more useful with certain cocktails than others. The flavour and notes you find in a good cocktail owe much to using a strainer, whether it’s a Julep Strainer or a Hawthorne strainer.

Both strainers offer their own benefits regarding a bartender’s skill level, whether they are a beginner or a veteran. That said, strainers are responsible (at least in part) for taste, texture, and aroma. So what’s the difference between a Julep and Hawthorne strainer? Does it matter?

What is a Julep Strainer? 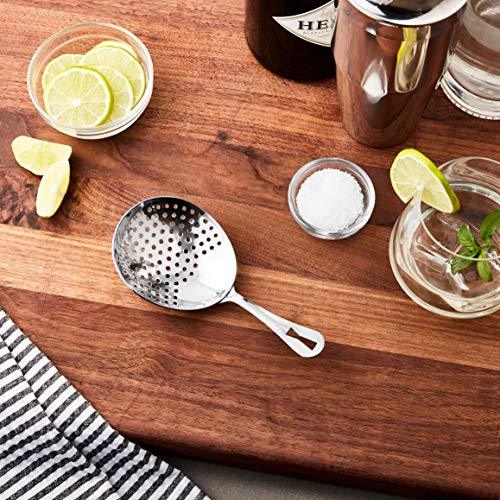 The Julep strainer is a beginner-friendly strainer known for being the original cocktail strainer. It derives its name from mint-Juleps, the drink of choice for Julep strainer use for over a century.

Beginners get a lot out of the Julep strainer because its wide, perforated, spoon-shaped end fits neatly over the top of the mixing glass. The spoon shape makes applying pressure with your finger(s) easy.

There’s nothing that truly stands out about a Julep strainer. Someone not in the know would assume it’s a cooking instrument, as it just looks like a giant spoon that happens to be perforated.

What is a Hawthorne Strainer? 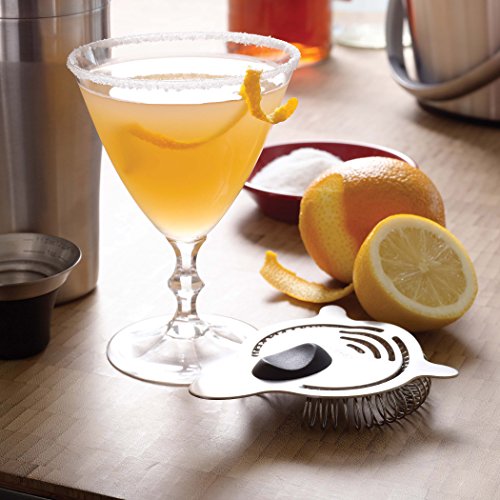 The Hawthorne Strainer stands out from the crowd thanks to its unique design. Unlike the spoon shape of the Julep strainer, the Hawthorne strainer is a flat plate perforated on the outer edges, with the addition of a thin metal (wire) coil that runs across the outer edge in a half-circle.

The Hawthorne is recognizable as an instrument associated with cocktails and it’s the primary strainer everyone sees in a bar. The spring—or coil—is designed to catch the bigger stuff, such as ice and large chunks of fruit or pulp. The perforated metal plate catches the smaller stuff.

Hawthorne strainers also feature two prongs that stick out of either end of the circular plate. These prongs keep the bartender from plunging the entire strainer in the mixing glass opening since they are designed to rest on the rim of the glass.

How Many Types of Strainers are There?

Hawthorne strainers are, far and away, the most common strainers you will find behind a bar. Julep strainers may have a place but only for beginner bartenders who are just getting used to mixing drinks.

The fact that Julep strainers are easy to use doesn’t negate the slow pour you get from them, especially in a high-profile bar where speed is of the essence. There are also two more strainer types, both of which are far less common in a bar than Hawthornes.

Why are They Called Hawthorne and Julep Strainers?

Julep strainers, as described above, got their name from the mint-Julep cocktail, which was a fairly popular and common drink in the 1800s and the early half of the 1900s. While Julep strainers were used for mixing all kinds of cocktails, mint-Juleps are the ones that stuck.

As the story goes, the man who patented his new, soon-to-be Hawthorne strainer (William Wright), had the patent signed by Denny P. Sullivan. Apparently, Sullivan owned the Hawthorne Cafe in the aforementioned Boston. The name stuck.

Hawthorne Strainer Vs Julep Strainer: Which One is the Best?

Hawthorne strainers offer a ton of versatility, especially since there are four types. The only true benefit you get from a Julep strainer is its ease of use. The fact that it pours so slowly sets it back from the Hawthorne.

Of course, some cocktails are better when poured slowly. Remember when we mentioned those little tidbits about aroma, taste, and texture? Those are the reasons you may see an experienced bartender occasionally break out the Julep strainer.

Alcohol is a finicky concoction, and there are times when a delicate, slow hand is necessary.

Though Julep strainers have been around for nearly two centuries now, Hawthorne strainers are the go-to cocktail-mixing strainers for most bars. However, that doesn’t mean the poor Julep strainer gets relegated to non-existence.

There are still a lot of uses for the Julep strainer, especially when breaking in a new bartender or mixing very specific cocktails that require a more delicate touch.