Japanese Jigger vs Bell Jigger Compared – Which to Use As an Amazon Associate, we earn from qualifying purchases. We get commissions for purchases made through links in this post.

Learning to use a jigger is essential if you want to become an expert at making drinks, but what is a jigger used for, and which type of jigger is the best pick for you?

A jigger is a tool primarily used for measuring and pouring alcohol, although it can also be used for syrups and other mixes. The Japanese jigger has a long, narrow design intended to reduce the risk of spilling, while the bell jigger has a rounder, goblet-shaped design.

There are several uses for a jigger, and finding the right one for your home bar is essential to mixing and pouring your drinks properly. This article will cover how jiggers are used and how a Japanese jigger compares with a bell jigger.

What Is a Jigger?

A jigger is, at its simplest, a bar tool for measuring alcohol and has been around for centuries. Historically, navies used jiggers to carefully ration spirits, and over time, the useful hourglass tool found its way into bars around the world for crafting cocktail recipes.

People theorize that the world originated from the name of a sail on a four-mast ship or shortened from the American slang ‘thingamajig.’

It might also be referred to as the cocktail measuring coup or double jigger. While many bartenders are starting to reduce their dependency on the jigger with free pouring, it’s still a very useful tool for measuring and pouring alcohol. There are three types of jiggers:

The hourglass jigger is an extremely common sight in bars across the country and easily identifiable by its conical shape. Its simple design leaves a lot to be desired, however, since the lack of a rim makes this tool prone to spilling. 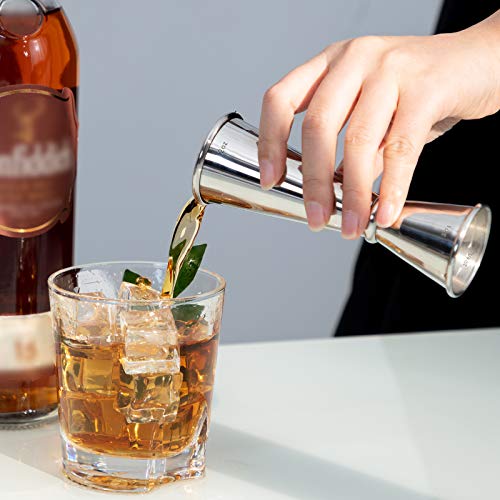 A tall, narrower version of the hourglass jigger, the Japanese jigger is generally considered to be a more professional option, with less risk of overpouring or overflowing while using. That’s largely thanks to its elongated design, which helps a bartender avoid tipping the alcohol out by mistake.

Sometimes, Japanese jiggers will come with measured marks inside the vessel to allow for smaller measurements as well as a lip to prevent overflowing and overpouring. 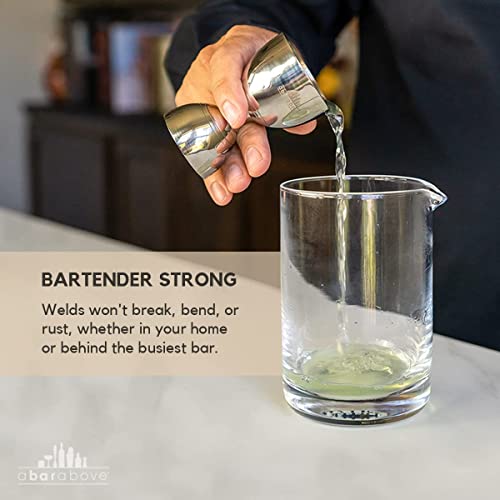 Like the hourglass jigger, the bell jigger is shorter and rounder, looking much like its namesake. The advantage of bell jiggers is that they usually have a rip around the lip of the bowl, allowing the user a little bit more leeway to avoid overflowing or overpouring.

Almost always, the smaller vessel will be half the size of the taller one, allowing for quick and easy relative measurements.

Both the bell and Japanese jigger are a little heavier, which isn’t a bad thing. Too light (like an hourglass jigger), and you risk sloshing the alcohol in the jigger.

Thankfully, when it comes to using a jigger, it doesn’t matter what type you have. The methodology to craft a masterful drink remains constant.

To start, pinch the jigger between your index and middle finger (some prefer the middle and ring), palm facing down.

Hold the jigger next to the rim of the glass you’re pouring into and fill it with your liquid of choice. The hardest part of using a jigger is not overpouring, so make sure you pour gently to avoid spilling or sloshing.

Once you’ve filled the jigger, tilt the finger closest to the glass to rotate the jigger and pour into the glass.

Of course, it’ll take some practice to attain mastery with the jigger, but once you get the hang of it, you’ll be pouring like a pro. After each use, remember to wash the jigger thoroughly—you don’t want to unintentionally mix flavours!

Why Are Jiggers So Important?

If you want to improve your cocktail skills, then a jigger is an essential piece of equipment. In some parts of the world, it’s actually required by law to use one, so make sure you know your stuff before you add your free-pour flair to a cocktail.

Of course, complex cocktail recipes that require a little finesse demand the use of a jigger. Free pouring is just not precise enough for the job in these cases.

Experimenting with mixology is all fine and dandy if you’re inventing your own concoctions at home, but you’ll definitely want to use a jigger if you’re trying to accurately copy a recipe or are bartending—it’s just common sense.

Professional mixologists rely on this simple tool for all their creations, and it’s a must-have at the bar.

Which Jigger Is Right for You?

Different jiggers have their pros and cons, but it’s important to set aside the pretentiousness that can often plague the barkeeping industry: any jigger will get the job done if you know what you’re doing, and technique is the most valuable skill to train before you blame your jigger for a bad pour.

That said, there are certainly some advantages to using one over the other.

The hourglass jigger is basic—which is about all there is to say about it. It’ll get the job done and provides accurate measurements for pouring.

The only major disadvantage is that it’s usually lighter than its two counterparts. As such, you’ll always want to make sure you have the jigger carefully balanced while using it to avoid overpouring or spilling.

The Japanese jigger is the clear winner when it comes to ease of use. The standard pinch method of holding a jigger makes it ideal to use, and it’s certainly more comfortable to grip than a bell jigger.

In addition, Japanese jiggers generally come equipped with additional measurement marks for even more precise pours. With that being said, the narrow, tall design of the Japanese jigger makes it impractical and slightly frustrating for syrups and liquors.

A practised hand, of course, can handle it with ease, but note that there is a learning curve to it.

Lastly, the bell jigger is an all-around good option that you can use for just about anything. The rimmed lip makes it beginner-friendly, and the wide, goblet-shaped bowl helps avoid the one glaring problem most beginner cocktail mixers have: overpouring.

Even pouring is an important part of using a jigger, and the bell jigger certainly makes steady pouring accessible for beginners.

However, the bell jigger may prove difficult if you don’t have dexterous fingers. Inarguably, the bell jigger is the hardest to pinch with its rounded shape, although by no means inaccessible.

There are three main types of jiggers used around the world for measuring and pouring drinks. Whichever jigger you choose to go with, the key is to stick with it, follow some recipes, and brush up on some tutorials.

Doing so will help you get a visual of the method and set you well on becoming a master bartender, at home or out on the job.